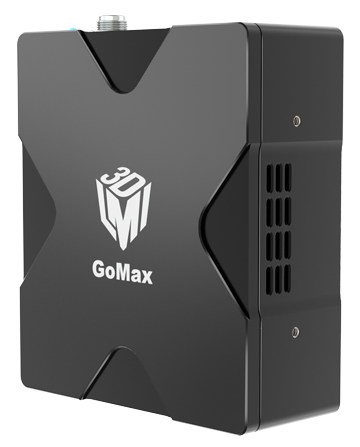 To accomplish a 100% inspection rate at the speed of production requires the very rapid processing of massive amounts of data.  To solve the acceleration challenge the GoMax® from LMI Technologies uses a combination of CPU and GPU power.

The GoMax® performance is powered by 1.5 teraflops per second of server-grade data processing performance at 15W.

The GoMax® smart vision accelerator handles the decision logic portion of the workload on the CPU, which is optimized for multi-threaded performance, while the compute intensive portion of the application runs on hundreds of GPU cores in parallel.
To interpret and execute program instructions, each GoMax is equipped with a 6-core ARM CPU with 8 GB of memory and multi-threaded optimization.  It processes instructions including arithmetic, control, logic, and I/O operation instructions in sequence.

For handling operations related to matrix processing, the GoMax utilizes a 256-core Cuda Pascal GPU.  The hundreds of simple cores have thousands of concurrent hardware threads, all of which the GoMax harnesses to process the large blocks of data involved in rendering the 3D images.

Chosen for its exceptional performance in a small, power-efficient form factor, an Nvidia Jetson TX2 which has an intelligent platform architecture highly suited to factory automation applications, is integrated.

Like all of LMI Technologies' components it is easy to use with a plug-and-play setup with web-based interface that smoothly connects to one or more Gocator® 3D smart sensors.

HTE Automation and LMI Technologies have the equipment and resources to help manufacturers in Kansas, Missouri, and Illinois maximize their production and inspection rate.