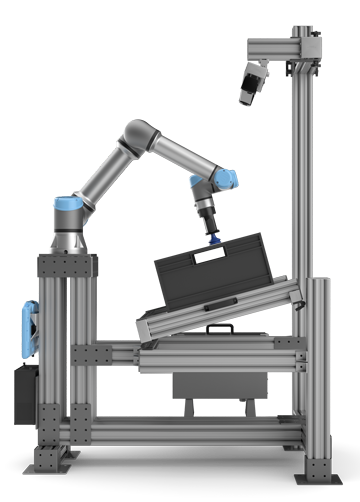 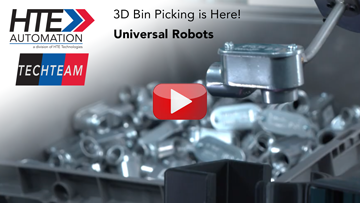 With the ActiNav Autonomous Bin Picking System from Universal Robots you will immediately realize an increase in the productivity of you machines resulting from increased machine up-time.  The autonomous robot moves without collision everywhere within the space you have easily and rapidly taught it with just a few presses of a button.  This autonomous system handles its own movements meaning your operators can engage in productive tasks elsewhere.

Another advantage is that your machine can work for longer uninterrupted periods because you can utilize deeper parts bins, the dimensions of which will be known to the cobot, and your operator will be notified when the bin is almost empty.  Less frequent refilling of bins means higher shift productivity.

Part placement normally requires a degree of precision that is well within the capabilities of the UR e-Series of Collaborative Robots, meaning that after being picked from a randomly filled bin, the part will be delivered to your machine fixture in the precise required orientation.

How does Universal Robots' ActiNav 3D bin picking system accomplish all of this?  Starting with an HR (High-Resolution) vision sensor, and software that matches the captured image to your part's CAD file resulting in exact part picking.  Add to that the AMM (Autonomous Motion Module) which works constantly to optimize the robot's motion path based on the part's orientation in the bin, and the required placement orientation.